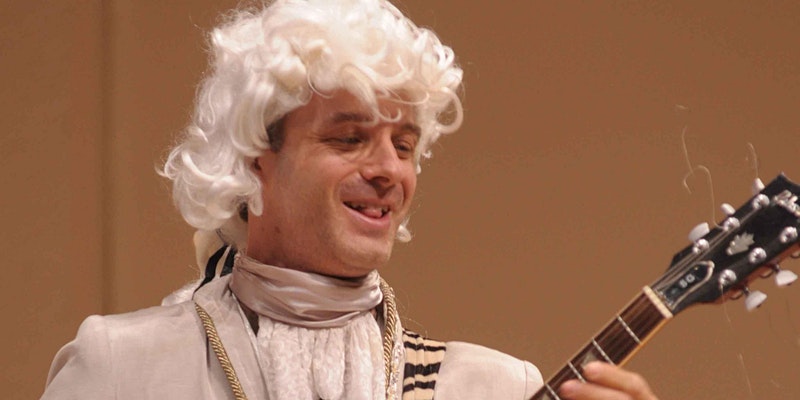 Join Rami Vamos and co-host, Benjamin Verdery, for an online performance with Schmutzinberry and Friends.

Early in his career Rami Vamos invented the fictional character of Wolfgang Amadeus Schmutzinberry. Schmutzinberry looks exactly like Mozart- but has certain glaring holes in his musical training. Schmutzinberry is blissfully unaware of this and sets out at the beginning of each educational program to compose “the greatest masterpiece of all time”. With help from the audience, his fellow musicians, and a few great works by geniuses of the past- he is able to learn basic concepts like what a melody is, what is style, and how is style affected by time?

Combining his talents as a guitarist, educator, writer, and composer, Vamos has created a wide array of original musical events ranging from children’s theater to concert music. His shows encourage people of all ages and backgrounds to explore music in the classical genre. Mr. Vamos works closely with the Chamber Music Society of Lincoln Center as a curriculum planner, writer, composer, and host for both their Chamber Music Beginnings concert series and CMS Kids programs.

Mr. Vamos began his career in education as a New York City Teaching Fellow. He currently teaches general music and conducts choir in Pelham, NY. He teaches career development and entrepreneurial courses for classical musicians at NYU. Vamos is on the guitar faculty of Concordia Conservatory in Bronxville, NY where he serves as string department head and teaches Suzuki Guitar group classes. Mr. Vamos writes two musicals each year for Concordia’s Musical Adventures for Children Concert Series. In 2007, Concordia received a grant from the New York State Music Fund to commission from him a full-scale musical for kids age 7-18. The work was the subject of a CBS Teen Kid News Documentary which aired nationwide. Teen Kid News has covered several of his other projects since then including his original musical- “The Monster of Guitaristan”, which was premiered at Concordia in the spring of 2016. Mr. Vamos has written several education articles for Soundboard Magazine and the New York Times Schoolbook Blog.

His arrangements and original compositions have been heard on CBS, Fox, and NPR. In 2003 he received a Meet the Composer Grant, which brought him to The Raritan River Concert Series. His work was premiered there by the Newman and Oltman Guitar duet and members of the Turtle Island String Quartet. In 1994 Vamos collaborated with guitarist Randal Avers on a set of guitar duets called “12 Silly songs for 12 Silly Strings”. The work was published by Clear Note Productions in 2014. He has also collaborated with his wife, violinist Nurit Pacht, on a series of original compositions for violin and guitar which they have performed in summer festivals and venues around the country.