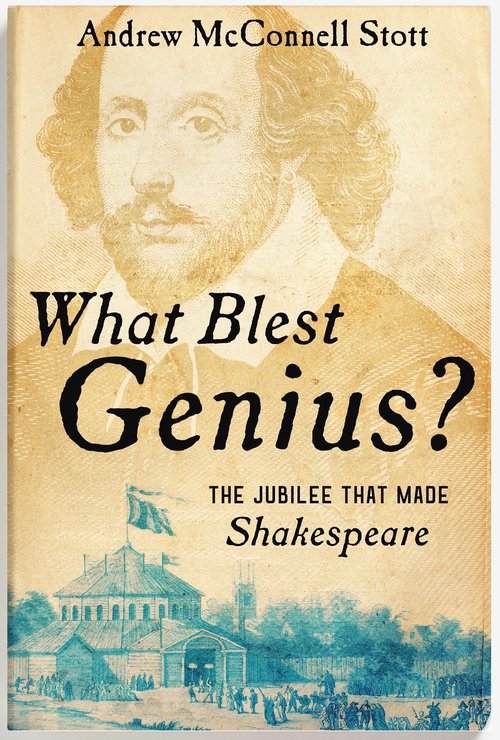 Award-winning author Andrew McConnell Stott will be in conversation with Westport's poet laureate, Diane Meyer Lowman about his book, What Blest Genius?: The Jubilee that Made Shakespeare.

Purchase a copy of the book.

What Blest Genius? tells the story of three strange days in 1769 that established William Shakespeare's reputation as the greatest writer of all time. What Blest Genius? won the National Award for Arts Writing, was a New York Times Book Review “Editor’s Choice,” and a book of the year for both the London Evening Standard and The Sunday Times.

Andrew McConnell Stott is the author of four books of non-fiction: Comedy (Routledge, 2005; 2nd edn, 2014); The Pantomime Life of Joseph Grimaldi (Canongate, 2009), which won the Royal Society of Literature Jerwood Prize for Non-Fiction, the Sheridan Morley Prize for Theatre Biography, the George Freedley Memorial Award, and was a BBC Radio 4 "Book of the Week"; and The Poet and the Vampyre: The Curse of Byron and the Birth of Literature's Greatest Monsters, described by The Boston Globe as “a period noir, full of atmospheric carriage rides, aggrieved letters, and deep personal miseries." The Poet and the Vampyre was a book of the year for both The Big Issue and The Sunday Times, and the basis for a BBC documentary produced by Oxford Scientific Films. He is also co-editor, with Eric Weitz, of the six-volume Cultural History of Comedy.

Andrew is the recipient of fellowships from the British Academy, the Huntington Library, the American Council on Education and the New York Public Library's Cullman Center for Scholars and Writers. He is Professor of English at the University of Southern California.\

Diane Lowman is Westport, Connecticut's first poet laureate.  essays have appeared in many publications, including O, The Oprah Magazine; Brain, Child; Brevity Blog; and When Women Waken. She writes a weekly column called Everything’s an Essay. In addition to essays, she has written a memoir called Nothing But Blue, which was published in November 2018. Shortly thereafter, she received her M.A. in Shakespeare Studies from the University of Birmingham’s Shakespeare Institute. She has explored other forms of literary expression in more than 2,000 haiku and essays analyzing each of Shakespeare's 37 plays.

The remarkable, ridiculous, rain-soaked story of Shakespeare’s Jubilee: the event that established William Shakespeare as the greatest writer of all time.

In September 1769, three thousand people descended on Stratford-upon-Avon to celebrate the artistic legacy of the town’s most famous son, William Shakespeare. Attendees included the rich and powerful, the fashionable and the curious, eligible ladies and fortune hunters, and a horde of journalists and profiteers. For three days, they paraded through garlanded streets, listened to songs and oratorios, and enjoyed masked balls. It was a unique cultural moment—a coronation elevating Shakespeare to the throne of genius.

Except it was a disaster. The poorly planned Jubilee imposed an army of Londoners on a backwater hamlet peopled by hostile and superstitious locals, unable and unwilling to meet their demands. Even nature refused to behave. Rain fell in sheets, flooding tents and dampening fireworks, and threatening to wash the whole town away.

Told from the dual perspectives of David Garrick, who masterminded the Jubilee, and James Boswell, who attended it, What Blest Genius? is rich with humor, gossip, and theatrical intrigue. Recounting the absurd and chaotic glory of those three days in September, Andrew McConnell Stott illuminates the circumstances in which William Shakespeare became a transcendent global icon.