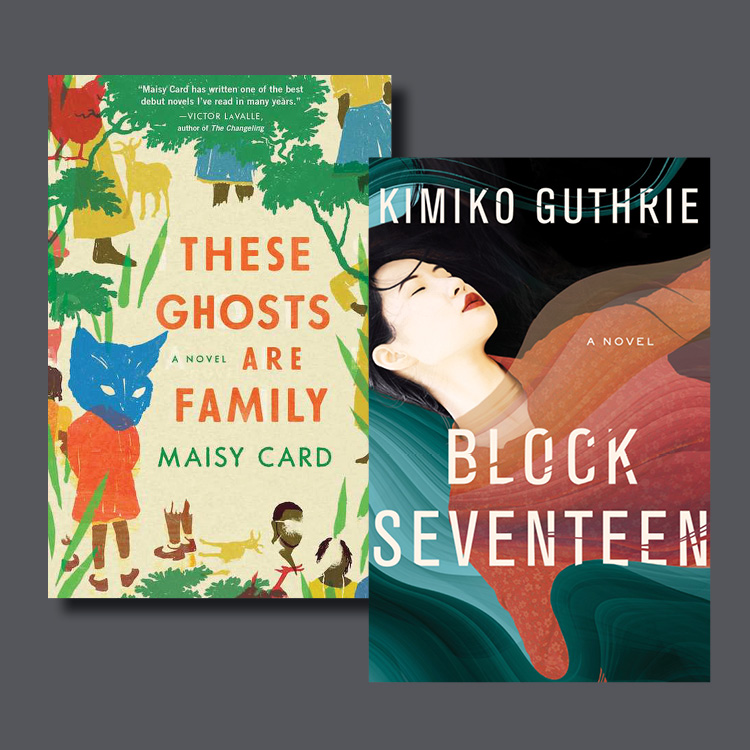 Family secrets are the central focus of two debut novels: Block Seventeen and These Ghosts are Family. Authors Kimiko Guthrie and Maisy Card will discuss their stories with Bernicestine McLeod and Judith Hamer.

You can watch the recording of this conversation here.

When Akiko “Jane” Thompson first met Shiro Yamamoto, she knew they were meant to be. Five years later, their happiness is threatened. An intruder burgles their apartment but takes nothing, leaving behind only cryptic traces of his or her presence. Shiro risks their security in a plot to expose the misdeeds of his employer, the TSA. Jane’s mother has seemingly disappeared, her existence only apparent online. Jane wants to ignore these worrisome disturbances until a cry from the past robs her of all peace, forcing her to uncover a long-buried family secret. Block Seventeen, at times charming and light, at others disturbing and disorienting, explores how fear of the “other” continues to shape our supposedly more enlightened times.

Stanford Solomon faked his own death and stole the identity of his best friend. And now, nearing the end of his life, Stanford is about to meet his firstborn daughter, Irene Paisley, a home health aide who has unwittingly shown up for her first day of work to tend to the father she thought was dead. These Ghosts Are Family revolves around the consequences of Abel’s decision and tells the story of the Paisley family from colonial Jamaica to present-day Harlem.

Kimiko Guthrie grew up in Berkeley, California, dancing like her mother and writing like her father. She teaches dance and theater at CSU East Bay and is the co-artistic director of Dandelion Dancetheater. She holds a BA in Creative Writing from UC Santa Cruz and an MFA in Choreography from Mills College. Kimiko has worked with many Bay Area-based dance companies, including Asian American Dance Performances and the Margaret Jenkins Dance Company. BLOCK SEVENTEEN, inspired by her experience growing up with a mother who was imprisoned as a child at the Rohwer incarceration camp during WWII, is her debut novel.

Maisy Card is a writer and a public librarian. Her debut novel, These Ghosts are Family, was a New

York Times Book Review Editors' Choice and was longlisted for The Center For Fiction's First Novel Prize. Her writing has appeared in The Paris Review, Lenny Letter, School Library Journal, AGNI, Lit Hub, Guernica and other publications. Her short story, "The True Death of Abel Paisley," was nominated for a Pushcart Prize in 2018.  Maisy was born in St. Catherine, Jamaica, but was raised in Jamaica, New York. She earned an MFA from Brooklyn College, an MLIS from Rutgers University and a BA in English and American Studies from Wesleyan University.

Bernicestine McLeod is a Trustee Emerita of her alma mater, Brown University, and has served on numerous boards throughout Fairfield County including the Westport Library and the Fairfield County’s Community Foundation.  She was a founding member of TEAM Westport and serves as its Secretary.  Bernicestine is currently the Chair of the Board of The Mary & Eliza Freeman Center for History and Community in Bridgeport. She is also President of McLeod Associates, Inc., an information technology consulting firm.

Judith A. Hamer has taught at the City College of New York, Columbia University, and New York University and served as a director of training at PaineWebber, Inc.  She ended her career as Learning Officer at The Rockefeller Foundation. Judith earned a BA from Cornell University, an MAT from Smith College, and a Ph.D from Columbia University. In 1993 she and her husband, Martin, collaborated on an anthology, Centers of the Self: Short Stories by Black American Women from the Nineteenth Century to the Present, Hill and Wang, NY.  She is currently working on a memoir.

Fiction and Non-Fiction We're Excited About