Westport artist Leonard Everett Fisher—whose career as a painter, illustrator, and designer spans over 70 years, has written and illustrated hundreds of children's books, creating over 700 paintings and 6000 scratch boards along the way. The Library has dedicated all of its gallery spaces to Fisher's work: the South, Sheffer and Jesup Gallery spaces, featuring many of Fisher's original illustrations along with several acrylic paintings. Each work highlights Fisher’s personal vision and deep sense of humanity which is conveyed through his unique use of shape, line and color.

Born in New York City in 1924, Fisher is a World War II veteran, earned his BFA and MFA at Yale, and is Dean Emeritus of Paier College of Art. He started illustrating children's books in 1954, and has published over 250 of them, 88 of which he also wrote. His books have been translated into over a dozen languages, and have won countless 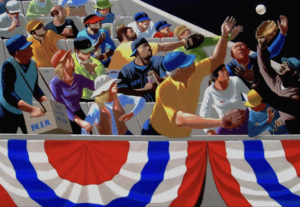 awards, including the Christopher Medal for Illustration and the National Jewish Book Award. In addition, Fisher was a 3-term board president of the Westport Library, where he, along with Shirley Land and Howard Munce, was responsible for acquiring the library's Black and White Works on Paper Collection, featuring over 100 illustrations by noted Westport artists, on view throughout the library.

Fisher's work has been exhibited nationwide, and can be found in the archives of universities across the country from Oregon to Yale. His works are in the collections of the Yale Art Gallery, the National Gallery of Art, the Library of Congress, the Smithsonian Institution Museum of Postal History, the New Britain Museum of American Art, the Museum of American Illustration, the Eric Carle Museum, and dozens of others.