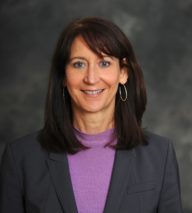 Steve Parrish sits down with Mary DeRosa, former Deputy Assistant and Deputy Counsel to the President, and National Security Council Legal Adviser in the Obama Administration. Professor DeRosa will discuss her role as Legal Advisor to the National Security Council during the planning and execution of the Navy Seal raid that resulted in the killing of Osama bin Laden.

Please register here for a seat in the Library's Forum.

Register here to watch the livestream on Zoom.

Mary B. DeRosa served as Deputy Assistant and Deputy Counsel to the President, and as National Security Council Legal Adviser in the Obama Administration. After leaving the White House in the Summer of 2011, she served as Alternate Representative of the United States to the 66th Session of the UN General Assembly, an Ambassador-level position with the US Mission to the United Nations. Prior to joining the Obama Administration in 2009, Ms. DeRosa was Chief Counsel for National Security for the Senate Judiciary Committee, working for the Chairman, Senator Patrick Leahy. She has also been a Senior Fellow at the Center for Strategic and International Studies, served on the staff of the Clinton Administration National Security Council as Legal Adviser and Deputy Legal Adviser, and was Special Counsel to the General Counsel at the Department of Defense. Before joining the government, Ms. DeRosa was in private practice at Arnold & Porter. She served as a law clerk to the Honorable Richard Cardamone, United States Court of Appeals for the Second Circuit.

Steve Parrish is the founder of Steve Parrish Consulting Group, LLC specializing in crisis management, corporate social responsibility, public affairs and communications for senior executives of corporations, law firms, and nonprofit organizations. Prior to founding SPCG, Steve was Senior Vice President, Corporate Affairs, of Altria
Group, Inc., serving in that capacity from 1995 until his retirement in 2008. At Altria, Steve was responsible for the Altria family of companies' government relations, communications, issues management, corporate philanthropy and corporate compliance. He chaired the company's crisis management team and served as Secretary of the Public Affairs and Social Responsibility Committee of the Board of Directors of Altria Group, Inc.

Steve led Altria’s efforts to build bridges to a range of stakeholders, including public health organizations, civic groups, the media and government. For more than a decade, Steve actively supported proposals to grant the Federal Food and Drug Administration authority to regulate the tobacco industry. His efforts were documented in network news broadcasts and national publications, including ABC’s “Peter Jennings Reporting”, a New York Times Magazine cover story, “If It’s Good for Philip Morris, Can It Also Be Good for Public Health?” and the national best-seller, “A Question of Intent”, by former Food and Drug Administration Chairman, Dr. David Kessler.

Steve has addressed a broad range of organizations, including the National Center on Addiction and Substance Abuse, the U.S. Hispanic Chamber of Commerce, The Conference Board and the World Presidents Organization. He has appeared on numerous national news programs such as Face the Nation, Meet the Press, Nightline, The News Hour on PBS, the Today Show and CBS Morning News.

Steve was born in Moberly, Missouri, and currently resides in Westport, Connecticut.