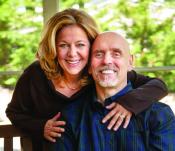 Join Westporters  Marge Perry and David Bonom as they discuss and give demos from their new book, Hero Dinners: Complete One-Pan Meals That Save the Day. Even if you love to cook, the last thing you want to do at the end of a long day is wash a sink full of pots and pans. Hero Dinners gives you the superpower to make delicious, well-balanced meals using fresh, wholesome ingredients—all in just one sheet pan or skillet. The wizardry behind these complete meals is in super smart, innovative— and simple!—techniques that ensure you won’t end up with muddled flavors and textures. With these inventive recipes, you’ll maximize the impact of each and every ingredient and flavor. And every recipe truly makes a complete meal, including protein and a vegetable or grain—and usually both.
MARGE PERRY and DAVID BONOM are the owners of Vittles & Verbs, a company that provides food content to media, commodity boards, and corporations of all sizes. They live just outside New York City with two well-fed dogs and an oversize cat. Marge is an award-winning columnist for Newsday, a regular contributor for Rachael Ray Every Day, a health columnist for Allrecipes magazine, the long-time Ask the Expert columnist for MyRecipes, and founder of the blog A Sweet & Savory Life. Her work has also appeared regularly in numerous other publications, including the New York Times, Cooking Light, and Better Homes & Gardens. Marge is a chef-instructor at the Institute of Culinary Education and teaches food writing both there and at New York University. David started his culinary career at Union Square Café and is a CCP (Certified Culinary Professional). After cooking for such notable clients as Bette Midler, first lady Hillary Clinton, the Tisch family, and Sotheby’s, David served as test kitchen director for a number of magazines. His recipes have appeared regularly in many publications, including EatingWell, Fine Cooking, Cooking Light, and Better Homes & Gardens. He has also contributed to more than fifty cookbooks, including the Weber grilling, Weight Watchers, and Flat Belly Diet series.