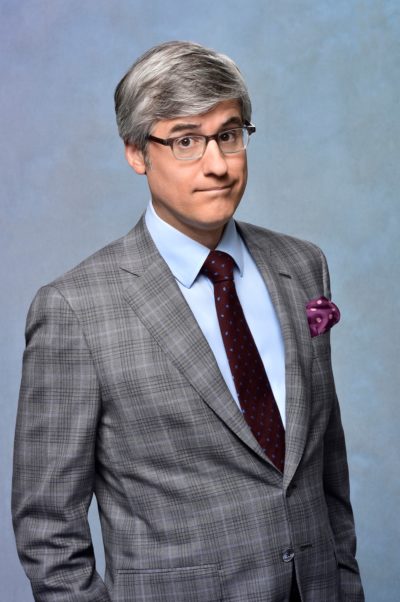 The Westport Library is thrilled to announce the first of its Trefz Newsmakers event series featuring CBS Correspondent Jeff Pegues and CBS News Correspondent, podcaster and TV personality Mo Rocca in conversation at the Library. Tickets available online ($35 for general seating includes a copy of Mo Rocca's Mobituaries book, or $100 for the VIP reception and reserved seating).

The yearlong fundraising series aims to connect intellectuals, foreign policy experts, artists, athletes and other newsmakers who are contending with topical issues. The goal of the program is to bring luminaries to our community—people who have made significant contributions to their fields and support the Library’s nearly 2,000 programs each year.

The series is moderated by Jeff Pegues, the Emmy Award-winning Justice and Homeland Security correspondent for CBS News. He is the author of Black and Blue: Inside the Divide between the Police and Black America and Kompromat: How Russia Undermined American Democracy.

Humorist, journalist and actor Mo Rocca is best known for his off-beat news reports and satirical commentary. Currently a correspondent for CBS Sunday Morning, Rocca is also the host of CBS’s series The Henry Ford’s Innovation Nation. The show features stories about some of the world’s greatest inventions—past and present—and the effort it took to create them, educating and inspiring audiences with stories of creativity, hard work, and passion. Mo created and hosted the Cooking Channel’s My Grandmother’s Ravioli, in which he learned to cook from grandparents across America. He is also a frequent panelist on NPR’s hit weekly quiz show Wait, Wait…Don’t Tell Me!

In January of 2019, Rocca’s podcast Mobituaries debuted as a joint venture between CBS News and Simon & Schuster. Rocca’s long love of obituaries led him to launch the project, an irreverent but deeply researched appreciation of the people (and things) of the past who have long intrigued him—from an unsung Founding Father to the ﬁrst Chinese-American superstar, from Neanderthals to the station wagon. Each of the ﬁrst season’s eight episodes is richly produced, consisting of Rocca’s narrated storytelling combined with his original interviews (e.g. President Bill Clinton, whose inauguration pushed Audrey Hepburn’s obit off the front page) and some never-before-heard voices from the past, courtesy of the CBS News archives. The Mobituaries book was published in November 2019, to coincide with the second season, and offered new, original stories combined with expanded “Mobits” from the podcast.

Mo Rocca began his career in TV as a writer and producer for the Emmy and Peabody Award-winning PBS children’s series Wishbone. He went on to write and produce for other kids series, including ABC’s Pepper Ann and Nickelodeon’s The Wubbulous World of Dr. Seuss—a pre-school series combining the whimsy of Seuss characters with the magic of Jim Henson puppetry. Mo is the author of All the Presidents’ Pets, a historical novel about White House pets and their role in presidential decision-making.

In 2015, all three of Mo Rocca’s shows earned a total of ﬁve daytime Emmy Nominations, with CBS Sunday Morning and Innovation Nation each winning for excellence in programming.

Jeff Pegues is the CBS News Chief Justice and Homeland Security Correspondent based in Washington, D.C. He is a graduate of Staples High School. He joined CBS News in July 2013 and reports for all CBS News broadcasts and platforms.

Since joining CBS News, Pegues has led the Network's coverage of some of the biggest stories of the last decade. From the Russia investigation to recent active shooter events and terrorist attacks Pegues is often at the top of the CBS Evening News. Pegues has also become one of the most visible and informed journalists on the investigation into Russian interference in the 2016 election. His new book Kompromat: How Russia Undermined American Democracy investigates how Russian President Vladimir Putin’s hackers poked into U.S. voter databases and what is being done now to shore up election systems in states across the country.

In addition, he has become one of the most informed voices on the conflict between the black community and police.  Not only has he reported extensively on recent police actions and Justice Department investigations in Baltimore and Ferguson but he has also authored a book on the issue.  Black and Blue: Inside the Divide Between Police and the Black Community is available everywhere books are sold. Pegues is the recipient of three Emmy Awards, numerous local and national Emmy Award nominations, the Sigma Delta Chi Award from the Society of Professional Journalists, and in 2017 was part of the CBS News team that earned an Edward R. Murrow Award.

Pegues has more than two decades of experience covering stories of national and international magnitude, including presidential elections, Hurricane Sandy and its aftermath.  His breadth of experience covering the news of the day is often called upon for radio interviews and speaking engagements. Prior to joining CBS News Pegues spent nearly 10 years at WABC-TV in New York. Previously, Pegues was a weekday anchor and reporter at WBAL in Baltimore. He also anchored the top-rated evening newscasts at WSVN in Miami in the late 1990s. He is a proud graduate of Miami University of Ohio where he was a scholarship football player and starting wide receiver in the early 1990s. Pegues went to high school in Westport, Connecticut where he was an All-State sprinter and All-Conference running back on the football team. Prior to moving to Connecticut Pegues lived overseas in France, Zimbabwe, Ivory Coast, Nigeria, Zaire and the Philippines.