StoryFest 2020: Stoker on Stoker - The Mysteries Behind the Writing of Dracula 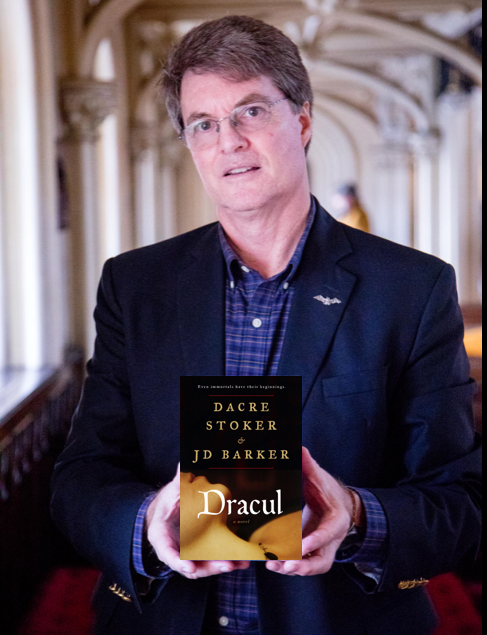 StoryFest 2020 kicks off with "Stoker on Stoker," a live event with Dacre Stoker.

This event was a live virtual event. Due to copyright, it has not been archived.

Purchase signed copies of Dracul along with other Stoker memorabilia here.

Dacre Stoker’s compelling and informative multimedia presentation, Stoker on Stoker, the Mysteries behind the Writing of Dracula, weaves together the details of Dracula’s history with Bram Stoker’s life in Dublin and London, and Stoker family lore, separating fact from popular fiction and revealing the truth about all things Stoker and Dracula. Illustrated with Dacre’s own collection of never before published, and seldom-seen historic images and customized to appeal to university groups, Gothic scholars, vampire fans, or history buffs, Stoker on Stoker has fascinated audiences around the world, exploring the issues behind the mysteries that have baffled Dracula scholars and fans since the book’s publication in 1897.

Due to the ongoing impacts of the coronavirus pandemic, StoryFest 2020 is going virtual. From September 15 - September 29, StoryFest will premiere 13 live and pre-recorded author events, featuring authors slated to appear in person at this year's festival. These events will feature top authors and creators in genre fiction, comics, young adult fiction, and middle grade fiction. And in cross-genre panels, they will explore the big ideas at the heart of telling stories in today's world.

About Dacre Stoker: Dacre Stoker is the great grand-nephew of Bram Stoker and the international best-selling co-author of Dracula the Un-Dead (Dutton, 2009), the official Stoker family endorsed sequel to Dracula. Dacre is also the co-editor (with Elizabeth Miller) of The Lost Journal of Bram Stoker: The Dublin Years (Robson Press, 2012). Released in October of 2018, Dracul, a prequel to Dracula, co-authored with JD Barker, was the UK’s # 1 Bestselling Hardcover Novel in Horror and Supernatural in 2018, and a top 5 finalist by the Horror Writers Association for the Bram Stoker Award® for Superior Achievement in a Novel. Film rights for Dracul have been purchased by Paramount Studios. Dacre’s most recent work Last Days, a short about the end of Bram Stoker’s life, will appear in Weird Tales Magazine July 2020.

A native of Montreal, Canada, Dacre taught Physical Education and Sciences for twenty-two years, in both Canada and the U.S. He has participated in the sport of Modern Pentathlon as an athlete and a coach at the international and Olympic levels for Canada for 12 years. He is also an avid player and coach of the unique game of Real Tennis. In May of 2016 an athlete he has been coaching for the past 4 years, Camden Riviere, won the World Championships of Court Tennis. He currently lives in Aiken, SC, together with his wife Jenne they manage the Bram Stoker Estate. Dacre has consulted and appeared in recent film documentaries about vampires in literature and popular culture. The Real Vampire Files (2010 History Channel), The Tillinghast Nightmare, (2014 Historical Haunts), Secrets of the Dead (2015 PBS), Mysteries at the Museum, (2017 Travel Channel) Legend Hunter (2019 Travel Channel) He currently hosts tours to Ireland to visit places in Dublin where Bram Stoker lived, was educated, worked, and researched. He also leads groups to Transylvania to explore both the life and times of the historic Vlad Dracula lll and also the locations where Bram Stoker set his famous novel.

Dracula: The Birth of Vampires