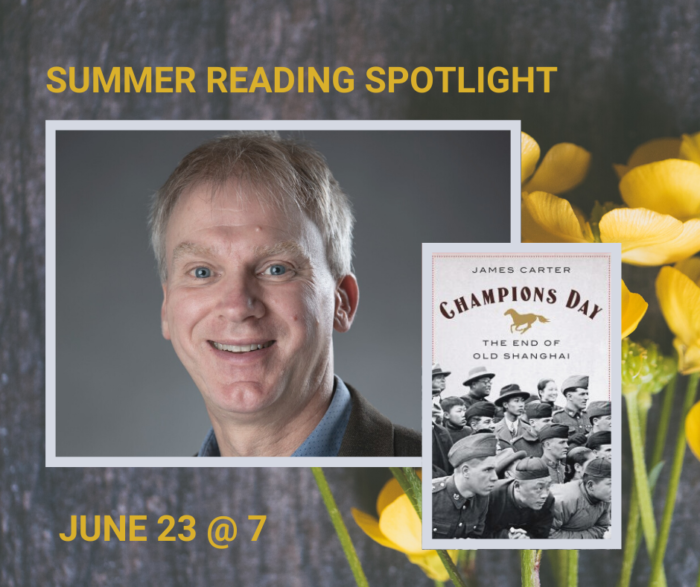 If you are looking for a book for your Read a Book that Offers a Window into Another Culture challenge, we have the event for you!  The Westport Library offers its next Summer Reading Spotlight event, featuring author and historian Dr. James Carter on Champions Day: The End of Old Shanghai.

How a single day revealed the history and foreshadowed the future of Shanghai. It is November 12, 1941, and the world is at war. In Shanghai, just weeks before Pearl Harbor, thousands celebrate the birthday of China’s founding father, Sun Yat-sen, in a new city center built to challenge European imperialism. Across town, crowds of Shanghai residents from all walks of life attend the funeral of China’s wealthiest woman, the Chinese-French widow of a Baghdadi Jewish businessman whose death was symbolic of the passing of a generation that had seen Shanghai’s rise to global prominence. But it is the racetrack that attracts the largest crowd of all. At the center of the International Settlement, the heart of Western colonization—but also of Chinese progressivism, art, commerce, cosmopolitanism, and celebrity—Champions Day unfolds, drawing tens of thousands of Chinese spectators and Europeans alike to bet on the horses.

In a sharp and lively snapshot of the day’s events, James Carter recaptures the complex history of Old Shanghai. Champions Day is a kaleidoscopic portrait of city poised for revolution.

James Carter is a writer and historian of modern China. He earned his PhD from Yale University under the direction of Jonathan Spence, and has taught since 1999 at Saint Joseph’s University in Philadelphia. His new book is Champions Day: The End of Old Shanghai, coming in June from W.W. Norton. In it, Carter describes the many worlds of Shanghai on the eve of World War II, centered on the city’s celebrated race track just weeks before Pearl Harbor.

Dr. Carter is the author of two previous books: Heart of Buddha, Heart of China: The Life of Tanxu, a 20th-century Monk (Oxford, 2010) and Creating a Chinese Harbin: Nationalism in an International City, 1916-1932 (Cornell, 2002). He has also written about China’s modern history and its relations with the West for the Times Literary Supplement, the Washington Post Monkey Cage blog, ChinaFile, the Los Angeles Review of Books China Channel, and numerous scholarly publications. He is a 1987 graduate of Staples High School.