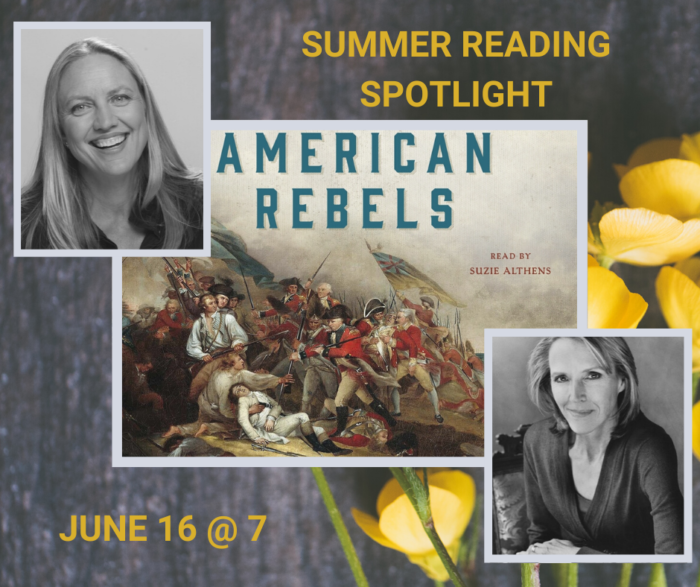 Looking for a book to fulfill the Read a Book by an Author Speaking at the Library Challenge?  The Westport Library offers its first Summer Reading Spotlight event, featuring local authors Nina Sankovitch and Charlotte Rogan.

This event is a virtual event. Register here.

Purchase a copy of American Rebels here. Signed bookplates are included with purchase.

Sankovitch (American Rebels: How the Hancock, Adams, and Quincy Families Fanned the Flames of Revolution and The Lowells of Massachusetts: An American Family) and Rogan (The Lifeboat and Now and Again) will discuss Sankovitch's new book, American Rebels.

merican Rebels, Sankovitch follows the intertwined lives of John Hancock, John Adams, Josiah Quincy Junior, Abigail Smith Adams, and Dorothy Quincy Hancock, all of whom spent their childhoods in Braintree, Massachusetts. How it that such prominent leaders of the American Revolution all came from a tiny village? The answer is fascinating, complex, inspiring, and largely unexplored — but now American Rebels tells this forgotten history of the American Revolution.

Among the issues to be explored in the conversation between Sankovitch and Rogan is the decision that had to be made by the American colonists, of whether to stay loyal to England or to rebel. The decision cut across class lines, gender lines, and within families. Even among the Quincys, the Hancocks, and the Adams, divisions rose and relationships were strained. How were tensions resolved? What role did each patriot play in fanning the flames of revolution? What sacrifices were made, and how was morale maintained? Join us on June 16th for answers to these and more questions. Questions from the audience will also be welcomed.

You can order a copy of American Rebels from Barnes & Noble of Westport, which can be picked up curbside. Book totes and signed bookplates are also available, free with the purchase of a book.

Nina Sankovitch is a bestselling author, avid historian, and voracious reader. In addition to being profiled in the New York Times (twice), she has written for the New York Times, the LA Times, Vogue, the Huffington Post, and other media. She is the author of four books of nonfiction. She lives in Connecticut with her family, and can be reached via her website, http://www.readallday.org.

Charlotte Rogan spent 25 years as a closet writer before The Lifeboat  (also perfect for the Read a Book with Water on the Cover challenge) was published in 2012. The book was nominated for The Guardian first book award, the International IMPAC Dublin Literary Award, and the Goldsboro Books and Historical Writers Association debut historical fiction prize. It was included on The Huffington Post’s 2015 list of “21 books from the last 5 years that every woman should read” and has been translated into 26 languages. Rogan’s second novel, Now and Again, continues to explore issues of morality and justice.

If you love history, don't forget to check out our History of the World resource guide series!