LIVE FROM THE LIBRARY: A STREAMING VIRTUAL SHOW

Rock out to the Hair Bands of the 80s, in full garb, while dancing in your own house with a nationally touring act unable to travel. 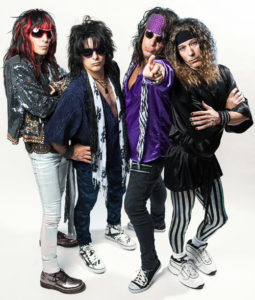 For nearly a decade, Mullett has proven themselves to be THE Premier Rockers for Hair Band fanatics and lovers of Rock ‘n’ Roll. By delivering the best of the 1980’s in Big Hair and faithful renditions, Mullett recreates the vibe of those times with unrivaled conviction. From corporate functions and private parties to college campuses, theaters, nightclubs and casinos, Mullett has the unique ability to ROCK and captivate their audience with the sights and sounds of the Glam Band era. Mullett fans agree; this is the closest anyone can get to classic Van Halen, Def Leppard, Bon Jovi, Journey and Poison without hitting 88 mph in a tricked-out DeLorean. Catch Mullett at a venue near you and let the 80’s live forever!

(Dinner price is independent and in addition to the concert)