The Exchange: Conversations About the Issues of Our Time 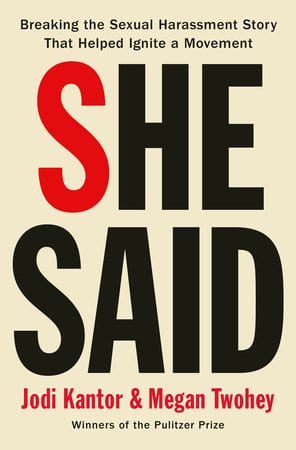 Please join us for a conversation with Pulitzer Prize-winning authors Jodi Kantor and Megan Twohey, moderated by Joan Gillman, to benefit the Westport Library.

Tickets, tables, and signed copies of the book can be purchased here.

Following guidance from the Westport Weston Health District and Town of Westport, all patrons ages 2+ must wear a mask in the Library. If you'd prefer to watch The Exchange from home, we are happy to provide you with a link; contact Nancy Klein for details. Please let us know your preference no later than September 30th.

Jodi Kantor is a prize-winning investigative reporter and best-selling author whose work has revealed hidden truths about power, gender, technology, politics, and culture.

Before Kantor and Twohey broke the story of Harvey Weinstein’s decades of sexual abuse allegations, Kantor’s article about the havoc caused by automated scheduling systems in Starbucks workers’ lives spurred changes at the company and helped launch a national fair scheduling movement. After she and David Streitfeld investigated punishing practices at Amazon’s corporate headquarters, the company changed its human resources policies, introducing paternity leave and eliminating its employee ranking system.

The article she wrote about Harvard Business School’s attempt to change its climate for women provoked a national conversation about women in business schools. Kantor’s report on working mothers and breastfeeding inspired two readers to create the first free-standing lactation suites for nursing mothers, now available in hundreds of airports and stadiums.

For their work on Mr. Weinstein, Kantor and Twohey also received a George Polk Award, the McGill Medal for Journalistic Courage from the University of Georgia, and honors from the Los Angeles Press Club and the Canadian Journalism Foundation. Along with other members of the Times sexual harassment reporting team, they were awarded the IRE Medal, from Investigative Reporters and Editors, Inc., the Batten Medal from the American Society of Newspaper Editors, Scripps Howard Award for Impact, a special citation from the Goldstein Awards at Harvard University’s Shorenstein Center, and the Matrix Inaugural Incite Award from New York Women in Communications. Kantor, a contributor to CBS This Morning, lives in Brooklyn with her husband, Ron Lieber, and their two daughters.

Megan Twohey has focused much of her reporting on the treatment of women and children. In 2016, she told the stories of women who accused Donald J. Trump of groping and other sexual misconduct. She uncovered an underground network where parents gave away adopted children they no longer wanted to strangers met on the Internet in a practice known as rehoming. The series, “The Child Exchange,” showed how this dangerous black market took place with no government oversight and at great risk to children and was a finalist for the 2014 Pulitzer Prize for Investigative Reporting. Twohey also was one of the first journalists to expose how police and prosecutors were shelving DNA evidence collected after sex crimes, robbing victims of the chance for justice. In response to her stories, Illinois passed the first state law mandating the testing of every rape kit.

Twohey is a contributor to NBC and MSNBC. A native of Evanston, Illinois, she lives in Brooklyn with her husband and daughter.

Joan Hogan Gillman has a distinguished career influencing companies and industries to develop and operationalize strategies to leverage disruptive technologies, starting with the Internet in 1995 and 5G today. She currently holds and has held several board director, corporate executive, and industry association positions over the past 25 years in the media, internet, and telecommunications industries. Ms. Gillman is a seasoned operating executive who held the position of COO & EVP, of a $1.1b operating division of the second largest US cable operator and served as a member of the executive team of the pioneering, London-based digital TV joint venture, British Interactive Broadcasting. She also has actively contributed to the leadership of industry associations and non-profits serving as chair of the Video Advertising Board, member of the boards of Women in Cable and Telecommunications (WICT) and the Interactive Advertising Bureau (IAB), vice chair and trustee of the College of the Holy Cross Board and currently chairs the Jesuit Volunteer Corp. Joan Gillman transitioned to corporate executive roles after 10 years of service in the United States Senate. Gillman is a member of NACD, has completed the Spencer Stuart New Director program and the WICT executive education program at the Stanford University School of Business and holds an MA of Legislative Affairs at George Washington University, and a BA from the College of the Holy Cross.