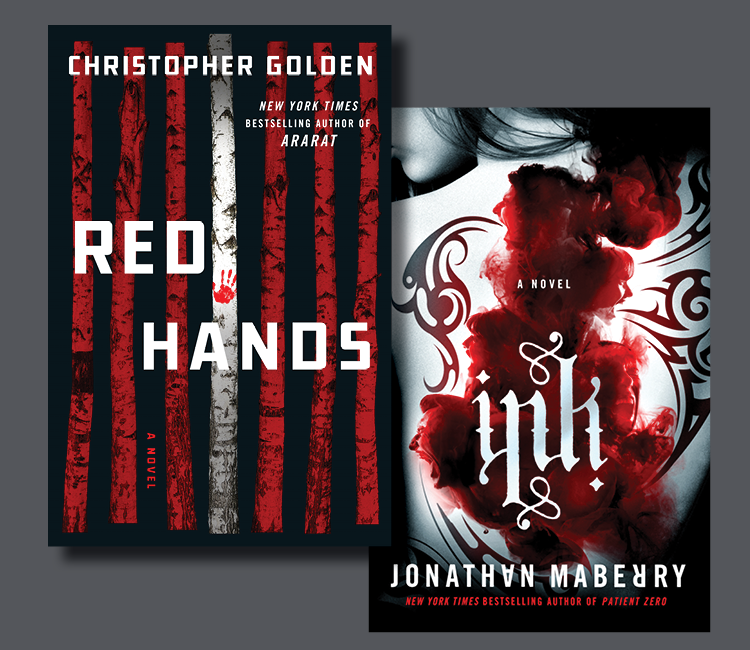 Join Jonathan Maberry and Christopher Golden for an evening of thrilling talk about the authors' newest books.

From New York Times bestselling author Jonathan Maberry comes a standalone supernatural thriller Ink, about a memory thief who feeds on the most precious of dreams.
Tattoo-artist Patty Cakes has her dead daughter’s face tattooed on the back of her hand. Day by day it begins to fade, taking with it all of Patty’s memories of her daughter. All she’s left with is the certain

knowledge she has forgotten her lost child. The awareness of that loss is tearing her apart. All through the town of Pine Deep people are having their most precious memories stolen. Something is out there. Something cruel and evil is feeding on the memories, erasing them from the hearts and minds of people. Ink is the story of a few lonely, damaged people hunting for a memory thief. When all you have are memories, there is no greater horror than forgetting.

In bestselling author Christopher Golden's supernatural thriller Red Hands, sometimes a story is a warning. Sometimes the warning comes too late.
A car plows through the crowd at a July 4th parade. The driver climbs out, sick and stumbling, reaching out…and everyone he touches drops dead within seconds. Maeve Sinclair watches in horror as people she loves begin to die and she knows she must take action. But in the aftermath of this terror, it’s Maeve who possesses that killing touch. Fleeing into the mountains, struggling with her own grief and confusion, Maeve faces the dawning realization that she will never be able to touch another human being again.

Whoever finds Maeve Sinclair first will unravel the mystery of her death touch, and many are willing to kill her for that secret. But as Maeve searches for a hiding place, hunted and growing sicker by the moment, she begins to hear an insidious voice in her head, and the yearning, the need… the hunger to touch another human being continues to grow.

CHRISTOPHER GOLDEN is the award-winning, bestselling author of such novels as The Myth Hunters, Wildwood Road, The Boys Are Back in Town, The Ferryman, Strangewood, Of Saints and Shadows, and (with Tim Lebbon) The Map of Moments. He has also written books for teens and young adults, including Poison Ink, Soulless, and the thriller series Body of Evidence, honored by the New York Public Library and chosen as one of YALSA’s Best Books for Young Readers. His original novels have been published in fourteen languages in countries around the world.