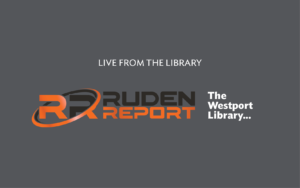 The Westport Library and Dave Ruden, the owner an editor of The Ruden Report, a Fairfield County-wide sports website, are excited to announce a new collaborative effort, The Ruden Report Live at the Library.

The debut show will stream live on Thursday, September 10 at 7:00pm on CrowdCast (REGISTER HERE) from the Library’s Trefz Forum and will feature a discussion on the recent decision by the state’s governing board to cancel the high school football season.

In the coming weeks, The Ruden Report will be recorded at the Westport Library's Media Studios, with the occasional live show emanating from the Trefz Forum.

Ruden, who grew up in Westport, has been a sportswriter in the area for over 35 years. He started The Ruden Report, which primarily covers high school sports in Fairfield County, seven years ago. Ruden’s work has appeared in the New York Times and he has worked at ESPN and CBS Sports.

Ruden will also be taking advantage of the Westport Library’s state-of-the-art Media Studios to record his weekly podcast.

The views expressed on The Ruden Report by the host and any guests do not reflect the opinion of the Library.