Two Westport authors share their ways to for coping with stress. Stephanie Bass turned to humor during the early months of the pandemic and Denise Zack provides proven ways to move around negativity and both will discuss their books with Kerstin Rao.

Ripple Affect is an 8-step workbook filled with readings, reflections, activities and meditations Denise uses to help clients gain insights into negative thought patterns to make lasting changes. Her therapeutic approach helps her clients to identify their damaging patterns and then positively alter them to improve emotional balance and decrease stress. 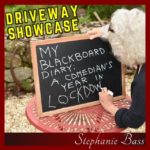 My Blackboard Diary: A Comedian's Year in Lockdown shares some of the inspirational sayings, funny observations and uplifting statements collected on a chalkboard Stephanie left out for neighbors and strangers to write upon.

Both books will be available for purchase at the event. Please register to attend.

Kerstin Rao's mission is to spread creativity and joy, whether through her art and stationery business, CuppaCards, or through her coaching service, Curate Your Mate. For 22 years, Kerstin was a teacher with the Westport Schools and is forever proud of all her former students. She and her husband Vijay live in a cozy cape in Westport, nurturing a garden of native plants and loads of local friendships.

Diagnosed with ADD at age 47, Stephanie Bass had breezed through many professions: publishing; marketing; teaching; cashier; corporate wife – secretly feeling she was the only one who hadn’t been issued an owner’s manual. At 70, Stephanie embarked on one more career: taking her greatest strength – making people laugh – she started formal training in standup comedy. She was just getting warmed up when a plague closed all the clubs. Undaunted, she invented a new venue: blackboard postings in her driveway, and her first book was born.

Andrew Blauner returns to the Westport Library with a new compilation of essays from 27 of today’s leading writers offer wide-ranging original pieces exploring how Thoreau has influenced and inspired them in Now Comes Good Sailing. A prophet of environmentalism and vegetarianism, an abolitionist, and a critic of materialism and technology, Thoreau even seems to have anticipated a world of social distancing in his famous experiment at Walden Pond.

Please register to attend this event either in-person in the Trefz Forum or online. Books are available for purchase.

Lauren Groff retreats from the COVID-19 pandemic to a rural house and writing hut, where, unable to write, she rereads Walden; Pico Iyer describes how Thoreau provided him with an unlikely guidebook to Japan; Gerald Early examines Walden and the Black quest for nature;  Mona Simpson follows in Thoreau’s footsteps at Maine’s Mount Katahdin; Jennifer Finney Boylan reads Thoreau in relation to her experience of coming out as a trans woman; Adam Gopnik traces Thoreau’s influence on the New Yorker editor E. B. White and his book Charlotte’s Web; and there’s much more. The result is a lively and compelling collection that richly demonstrates the countless ways Thoreau continues to move, challenge, and provoke readers today.

Andrew Blauner is a literary agent and the editor of seven previous anthologies, including Coach: 25 Writers Reflect on People Who Made a Difference, The Peanuts Papers: Writers and Cartoonists on Charlie Brown, Snoopy & the Gang, and the Meaning of Life, and In Their Lives: Great Writers on Great Beatles Songs.

Zoë Pollak is a doctoral candidate in English and Comparative Literature at Columbia University. Her writing has appeared in AGNI and Women’s Studies, and is forthcoming in the Hopkins Review and Sonnets from the American: An Anthology of Poems and Essays.

Jordan Salama is a writer whose essays and stories have appeared in National Geographic, The New York Times, Scientific American and other publications. A graduate of Princeton University, his first book, Every Day the River Changes, a journey down Colombia's Río Magdalena, will be published in November.

Celebrate two Westport authors in one night! Galia Gichon, author of THE ACCIDENTAL SUFFRAGIST and Collin Carroll, who wrote FITNESS BY DARWIN will discuss their new books with members of the Westport community. Whether you're curious about how to use human evolution in exercise or enjoy reading historical novels, this is a program for you.

THE ACCIDENTAL SUFFRAGIST starts in 1912. After a tragic event, Helen Fox—a factory worker living in New York’s tenements—attends her first suffrage meeting, quickly becoming seduced by the cause. Accepting a job offer from leader Harriot Stanton Blatch, Helen finds herself working alongside famous activists as she tries to change the world, afford the basics, and balance a disgruntled family back home when she marches to Washington, D.C. In a time when the obstacles for women— from any background—were insurmountable, Helen discovers her voice and dreams of equality in a male-dominated society.

FITNESS BY DARWIN is a pop-science book explaining how an exercise program based on the tenets of human evolution can make its practitioners shapelier, stronger, and healthier. This book uses 600 sources - almost all of which are from peer-reviewed publications - to make its point, couching this hard science in an inviting, informal tone to make the material accessible to workout newbies and fitness professionals alike. Fitness by Darwin offers readers an analysis of studies, a series of unique full-body exercises, and at-home tutorials so that they might maximize the safety and efficiency of their own workouts.

Both books will be available for purchase at the event. Please register to attend.

Galia Gichon spent nearly ten years writing financial research for top investment banks before launching Down-to-Earth Finance, a top personal financial advising firm in New York. Galia is the author of My Money Matters, a personal finance book which received notable press from the New York Times, TODAY Show, CNN, Newsweek, Real Simple and more. Galia Gichon consistently leads seminars for Barnard College where she has taught for 13 years, and other organizations. She is an avid angel investor focusing on women-led and impact startups and actively counsels startups through accelerators.

Marcia Falk’s professional career started as an editor for a large publishing company in NYC and then moved to public relations for a development firm in Miami. Her interest in the American suffrage movement burgeoned when she and her family lived in Rochester, near where its founders lived. Marcia spends much time at the Westport Library where she has spent some of her finest hours as a volunteer, and most recently, igniting the 2020 WestportREADS program dedicated to the 100th anniversary of the passage of The Nineteenth Amendment to the Constitution.

Collin Carroll is a writer, personal trainer, tabletop game designer, three-time Ironman triathlete, and amateur evolutionary biologist. These bona fides double as evidence of his ADHD. Collin was born and raised in Westport and he currently volunteers as a firefighter and EMT in Weston, CT.

Benay Rubin is the owner of SHE3 Well+Fitness a Wellness &  Barre Fitness Boutique studio and a Master Fitness teacher and health educator for adults, teens, and children. Benay was trained by the founder of Barre exercise who developed the original barre program called the Lotte Berk Method and is also certified in Pilates, Yoga, and  MBSR  Mindfulness training. She is a Certified Functional Medicine Nutrition and Lifestyle Counselor and a Board Certified Holistic Health Practitioner. Benay is currently pursuing her masters degree in Occupational Therapy in order to further help people with barriers which impact meaningful activities and one's quality of life.

If you missed this event, you can watch the recording anytime in our video gallery.

Everyone knows Elizabeth Blackwell was America's first female doctor, but very few know that her sister Emily was the third. Biographer Janice P. Nimura will talk about these two remarkable women with Dr. Perri Klass.

Janice P. Nimura—an independent historian whose last book, DAUGHTERS OF THE SAMURAI: A

JOURNEY FROM EAST TO WEST AND BACK, was one of the New York Times's top 50 nonfiction books of 2015—received a Public Scholar Award from the National Endowment of Humanities for her research on THE DOCTORS BLACKWELL .

Perri Klass is a professor of journalism and pediatrics at New York University, codirector of NYU Florence, and national medical director of Reach Out and Read. Her book, A GOOD TIME TO BE BORN: HOW SCIENCE AND PUBLIC HEALTH GAVE CHILDREN A FUTURE is about the fight against child mortality that transformed parenting, doctoring, and the way we live. She writes the weekly column "The Checkup" for the New York Times.

Purchase a bookplate signed copy of THE DOCTORS BLACKWELL.

THE DOCTORS BLACKWELL looks closely at the sisters Elizabeth and Emily Blackwell, English immigrants who, in quick succession, became the first and third women, respectively, in the U.S. to earn medical degrees—and who, in 1857, founded the very first hospital staffed by women, the New York Infirmary for Indigent Women and Children.

The Blackwells’ ambitions extended far beyond themselves. Whereas Elizabeth strove to stand alongside her male allies as an exceptional woman who had proved herself their equal, Emily yearned to strip her gender and make her way in anonymity. Nimura writes of Elizabeth, “caring for suffering individuals had never been the engine that drove her. In becoming a doctor, she meant to heal humanity.” And as Emily once reminded Elizabeth, the point was “to be not the first female M.D.s, but the first of legions.”

Read what the New York Times printed about THE DOCTORS BLACKWELL.

Watch a video of Dr. Robin Oshman telling her story as one of the first female doctors in Westport.