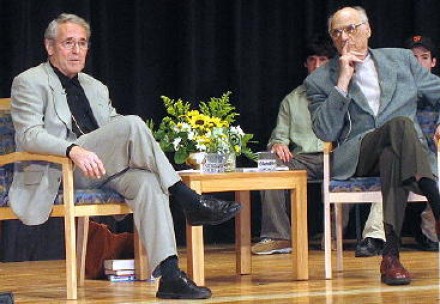 Two prolific literary legends, Arthur Miller and Tom Cole, headlined the 2003 Malloy Lecture in the Arts in lively conversation with the more than 700 audience members, including actor Gene Wilder.

Miller was an American playwright, essayist and prominent figure in 20th century American theater and culture. Among his most notable works are All My Sons, Death of a Salesman, The Crucible and A View from the Bridge. The iconic Death of a Salesman is widely regarded as one of the finest, most iconic works of the era.

Playwright, screenwriter and fiction writer Tom Cole wrote the screenplay for Sundance Film Festival favorite Smooth Talk with and was nominated for a Drama Desk Award for his provocative Medal of Honor Rag about a Vietnam soldier’s encounter with a psychiatrist. Cole’s stories were published in the Atlantic, Esquire, Saturday Evening Post and Kenyon Review among others. His first story, “Familiar Usage in Leningrad” won the Atlantic First Award in 1961 and was a top winner in the O. Henry Prize Stories Anthology.