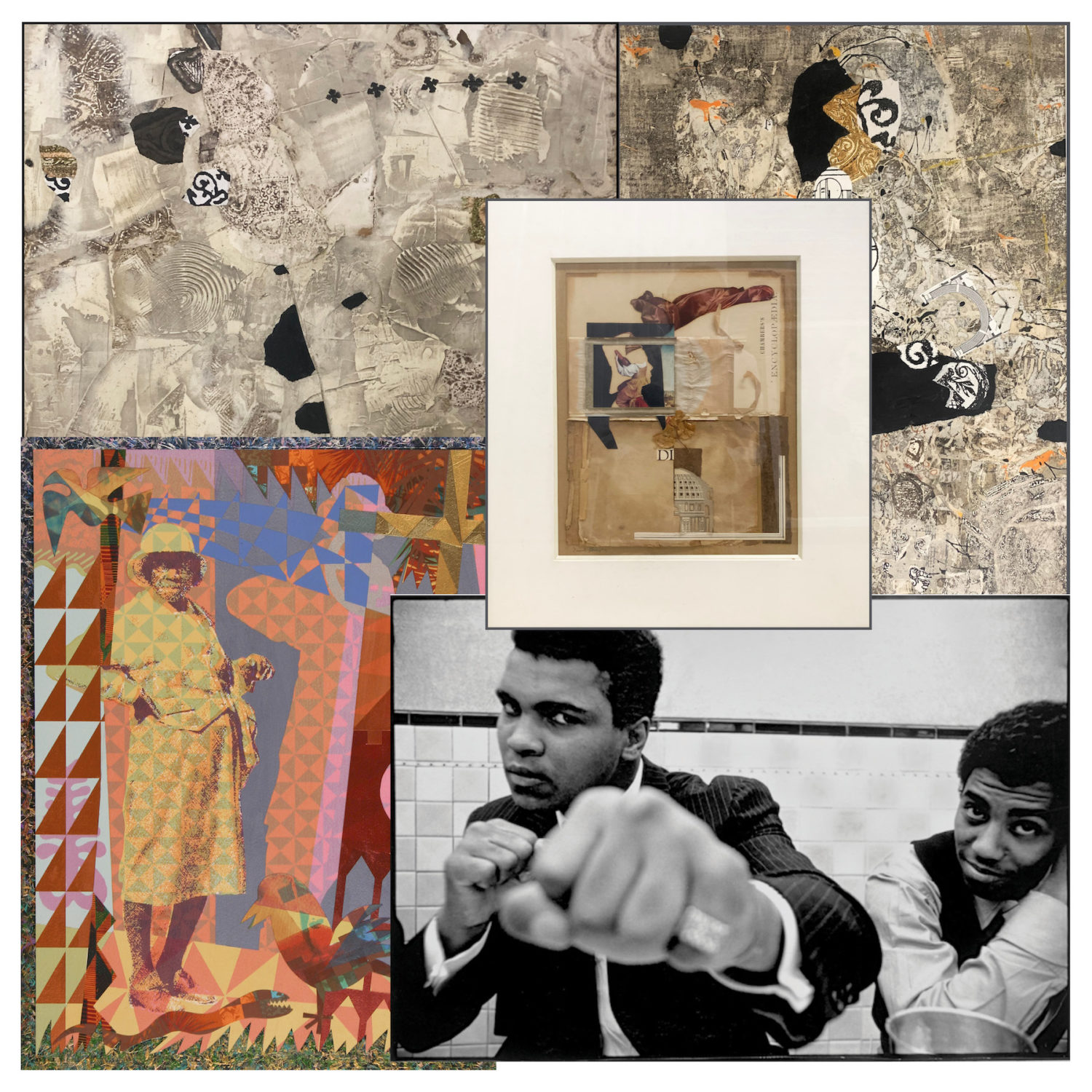 Those strolling The Westport Library this month will notice a new collection of artwork gracing the walls, with five remarkable new pieces gifted to the Library’s collection.

The latest acquisitions include two collage paintings and one collage illustration by the revered Fred Otnes, donated by the Robert K. Otnes Trust; a piece donated by renowned artist Charles Joyner; and an iconic image of the famed boxer Muhammad Ali donated by photographer Richard Frank.

The two paintings by Fred Otnes and the Joyner piece are all hanging in the Library’s mezzanine, with the Otnes illustration appearing in one of the conference rooms. The Ali image is located prominently in the first-floor stairwell.

“Westport has a long and rich tradition of fostering artists and honoring their work,” said Westport Library Exhibit Curator Carole Erger-Fass. “We are very proud to be part of that tradition and incredibly fortunate to receive so many amazing pieces to add to our collection. We thank all our generous donors, and we invite all our patrons to visit and see them in person.”

All three artists have connections to Westport, many dating back years.

Otnes was born and lived in the Midwest before moving to Westport in 1953 while working with the prestigious Rahl Studios in New York. Here, he found community with area’s many illustrators and remained in the area for most of his life, passing away in Westport in 2015 at the age of 89.

A native North Carolinian, Joyner came to Westport in 1964 at 16 years old as part of the American Friends Service Committee’s “Southern Negro Student Program,” a Quaker initiative that placed southern Black students in the north to complete high school and live with host families. Joyner graduated from Staples High in 1966. From March through June of this year, the exhibit, “Charles Joyner: Stepping Out on Faith,” funded in part by CT Humanities and the Drew Friedman Foundation, was housed in the Library’s Sheffer Gallery. The artist donated the title artwork from that event.

Frank, meantime, has lived in Westport for more than 30 years with his wife Leona, a painter and art teacher. In addition to his many notable works, he documented the Library’s transformation project, which was completed in 2019 and culminated in an exhibit when the Library reopened called “Transformation: The Workers.” His Ali image is one of his most famous works, taken at Jake’s Diner in Athens, Ohio, in 1969.

“I was having a cup of coffee at 11 pm, and to my surprise Muhammad Ali walked in, surrounded by an entourage of students,” Frank recalled. “Although I was awed by his presence, I summoned up the nerve and asked him if he would mind taking his picture. I quickly decided that the best vantage point would be from behind the counter and managed to keep the camera steady enough to capture this moment.”

For more on the Library’s art collection and upcoming events, visit our Art at the Library webpage.