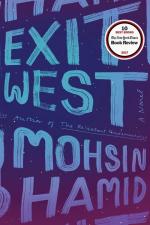 The Westport Library’s WestportREADS selection for January/February 2019 is Exit West by Mohsin Hamid,an award-winning novel that follows two refugees who, against all odds, find life and love on the run. Forced out of their country by civil war, this moving story celebrates love, courage, family and the fierceness of the human spirit. The book was a finalist for the Man Booker Prize and the National Book Critics Circle Award and named a top ten best book of 2017 by the New York Times.Companion books will also be available for kids and teens.

To request a discussion leader for your group, contact Kathleen Malloy at kmalloy@westportlibrary.org. 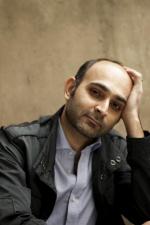 We Asked the Author Mosin Hamid:

What inspired you to write this story?
I have migrated my whole life—from Pakistan to California at age 3, back to Pakistan at 9, to America again at 18, to Britain at 30, and back to Pakistan nine years ago. I am a thoroughly mongrelized person, a complete hybrid. So I find the current anti-migrant sentiment that one encounters all over the world to be very troubling indeed. I wanted to write in response to that.

Why did you choose to use magic realism to tell the story of Nadia and Saeed?
I'm not sure I would call it magical realism, although I don't object to that label. For me, technology is functioning to obliterate geographic distance. The black rectangles of our mobile phone screens let our minds travel instantly to any point in the world —and beyond, for that matter. The black rectangles of the doors in my novel simply allow people's bodies to do the same. Sometimes one has to bend reality slightly to explore what reality is.

What would you like Westporters to take from reading Exit West?
There isn't a single message, or a puzzle that readers have to solve. The novel will hopefully make people feel things, and when we feel things, we change. Perhaps I am drawn to the idea that everyone is a migrant, and that we need to have more compassion for the migrant within each of us.
Author photo credit Hamid Edelstein

From the New York Times, "New & Noteworthy" section, 11/6/18: “As a White House correspondent specializing in foreign policy, I’ve written dozens of stories about how the United States confronts — or more often, fails to confront — the horrors of civil war in Syria, Yemen, Libya and elsewhere. Mohsin Hamid’s slender novel EXIT WEST takes the geopolitics out of war completely — it doesn’t even name the country being ravaged — and views it purely through the lens of a young couple, Nadia and Saeed, who fall in love among the ruins. The language is spare and unsentimental; Hamid follows the young couple to bleak refugee camps in Mykonos, London and Marin County, Calif. (he names those places, sketching out a dystopian portrait of a world coping with a mass-migration future). Nadia and Saeed are brave, heartbreaking and utterly credible. But they make their journey around the world by passing through mysterious black doorways — an abrupt turn to magical realism that has left some readers puzzled. I think it captures how quickly, in an era of mass mobility and digital communications, the victims of distant wars can end up on the West’s doorstep.”—Mark Landler, White House Correspondent

WestportREADS is an annual program dedicated to strengthening
the community through the shared experience of a book.

WestportREADS 2019 is funded by the estate of Jerry A. Tishman.

WestportREADS 2019 Companion Books
The topics, programs & discussions of WestportREADS include all members of the family. In that spirit, we have selected companion books for readers of all ages. These books may be borrowed from the Library .

WestportREADS is an annual program dedicated to strengthening the community through the shared experience of a book.

A Very Large Expanse of Sea by Tahereh Mafi
It's 2002, a year after 9/11. It's an extremely turbulent time politically, but especially so for someone like Shirin, a sixteen-year-old Muslim girl who's tired of being stereotyped. Shirin is never surprised by how horrible people can be. She's tired of the rude stares, the degrading comments--even the physical violence--she endures as a result of her race, her religion, and the hijab she wears every day. So she's built up protective walls and refuses to let anyone close enough to hurt her. Instead, she drowns her frustrations in music and spends her afternoons break-dancing with her brother. But then she meets Ocean James. He's the first person in forever who really seems to want to get to know Shirin. It terrifies her--they seem to come from two irreconcilable worlds--and Shirin has had her guard up for so long that she's not sure she'll ever be able to let it down.

Kiki and Jacques by Susan Ross
Twelve-year-old Jacques, who must contend with difficult family dynamics and pressure from an older boy to help him commit a crime, is surprised to discover that he has much in common with Kiki, one of the many new Somali refugees who have immigrated to his Maine town.

Author Susan Ross comments, "Our WestportREADS adult book, Exit West, is a beautiful example of a novel that is able to fully capture the immigrant journey in its complexity of experience and emotion. This is the magic and wonder of fiction! In Kiki and Jacques, I hope kids can similarly feel what it's like to be inside the lives of the characters and begin to share the experience of a refugee child—as well as the challenges facing kids welcoming new and different friends to their school. When I first went to the local library in Maine to meet Somali teenagers in researching this book, the children's librarian told me something I've never forgotten: that in her experience, kids are a whole lot more alike than they are different. I looked around the library in a town that had once been largely one-dimensional and saw Somali kids doing exactly what my kids were doing at home—playing video games, chatting with friends, talking about siblings, parents, and life.

At the beginning of Kiki and Jacques, each group of kids is wary of the other -- but by the end, Jacques comes to realize through school and soccer that he and his new Somali classmates have a lot in common -- though a lot remains different, too, and that's fine."

Susan's upcoming middle grade novel, Searching for Lottie, is a contemporary Holocaust mystery based in part on her own family's immigrant and refugee story.

Someone New by Anne O’Brien Sibley
Are you new here? Do you know someone new? In I'm New Here and Someone New, young readers explore the immigrant experience through both "windows" and "mirrors." In I'm New Here, readers meet three recent immigrants trying to adjust to a new country and school. In Someone New, the same story is told from the perspective of the students who welcome the newcomers. An honest and heartwarming look at diversity, inclusion, and friendship.

The Big Umbrella by Amy June Bates
By the door there is an umbrella. It is big. It is so big that when it starts to rain there is room for everyone underneath. It doesn't matter if you are tall. Or plaid. Or hairy. It doesn't matter how many legs you have. Don't worry that there won't be enough room under the umbrella. Because there will always be room.