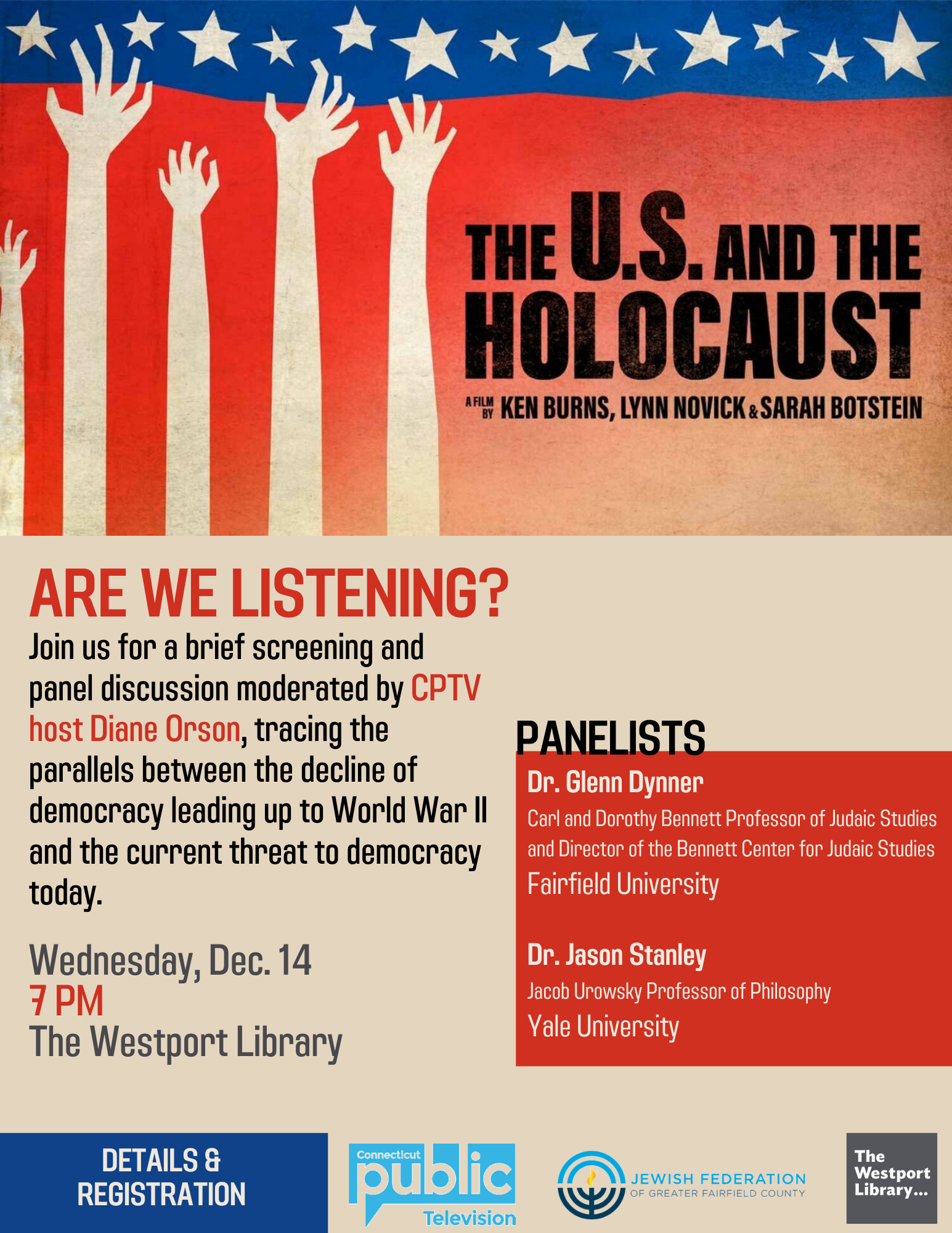 Ken Burns' new three-part documentary, The U.S. and the Holocaust, directed and produced by Burns, Lynn Novick and Sarah Botstein, explores America’s response to the horrors of the Holocaust and the rise of authoritarianism in Europe. Join us for a brief screening and panel discussion moderated by CPTV host Diane Orson, tracing the parallels between the decline of democracy leading up to World War II and the current threat to democracy today.

The U.S. and the Holocaust, delves into America’s response to one of the greatest humanitarian crises of the 20th century. Inspired in part by the United States Holocaust Memorial Museum’s “Americans and the Holocaust” exhibition and supported by its historical resources, the film examines the rise of Hitler and Nazism in Germany in the context of global antisemitism and racism, the eugenics movement in the United States and race laws in the American south. The series, written by Geoffrey Ward, sheds light on what the U.S. government and American people knew and did as the catastrophe unfolded in Europe.

Combining the first-person accounts of Holocaust witnesses and survivors and interviews with leading historians and writers, The U.S. and the Holocaust dispels competing myths that Americans either were ignorant of the unspeakable persecution that Jews and other targeted minorities faced in Europe or that they looked on with callous indifference. The film tackles a range of questions that remain essential to our society today, including how racism influences policies related to immigration and refugees as well as how governments and people respond to the rise of authoritarian states that manipulate history and facts to consolidate power.

Diane Orson is a special correspondent with Connecticut Public Broadcasting. She is a longtime reporter and contributor to National Public Radio. Her stories have been heard on Morning Edition, All Things Considered, Weekend Edition, and Here And Now. Orson spent seven years as CT Public Radio's local host for Morning Edition. Her story about an 83-year old atomic veteran placed first in the Public Media Journalists Association 2021 national arts awards. She is the co-recipient of a 2021 Edward R. Murrow Award for a video based on that story. Diane also co-produced a piece of radio nostalgia about New Haven's Shubert Theater that received a Peabody Award.

Sarah Botstein is one of the filmmakers of Florentine Films and has for more than two decades produced some of the most popular and acclaimed documentaries on PBS. Her work with directors Ken Burns and Lynn Novick, includes Hemingway (2020), College Behind Bars (2010), The Vietnam War (2017), Prohibition (2011), The War (2007) and Jazz (2001). Currently, she is producing an epic six-part 12- hour series on the American Revolution and a project on Lyndon Johnson’s life andpresidency. In addition to the television broadcasts, Botstein works on digital and education initiatives, in collaboration with PBS Learning Media and WETA-TV. She helps to oversee content for Ken Burns UNUM, a web-based platform and mini series which utilizes scenes from Florentine Films body of work to highlight historical themes relevant to our time.

Dr. Glenn Dynner is the Carl and Dorothy Bennett Professor of Judaic Studies and Director of the Bennett Center at Fairfield University. Since 2014, Dynner has served as professor of Religion and chair of the Religion Department at Sarah Lawrence College. He received his BA with honors in Comparative History from Brandeis University, an MA with honors from McGill University in Jewish Studies, and his PhD from Brandeis University in the Department of Near Eastern and Judaic Studies in 2002. Dynner is the author of two acclaimed books published by Oxford University Press: Men of Silk: The Hasidic Conquest of Polish Jewish Society (2006), winner of the Koret Publication Prize and a National Jewish Book Award Finalist, and Yankel’s Tavern: Jews, Liquor, & Life in the Kingdom of Poland (2013), which received honorable mention for the 2013 Jordan Schnitzer Book Award. The author of numerous journal articles and essays in edited volumes, he is currently working on a book titled The Light of Learning: The Hasidic Revival in Poland on the Eve of the Holocaust. Recipient of a prestigious Guggenheim Fellowship in 2019-20, he was associate editor of the journal Jewish History from 2016-18 and currently serves as co-editor of Shofar: A Journal of Interdisciplinary Jewish Studies. Dynner is a member of the Scholarly Advisory Board of the YIVO Institute and is the YIVO representative on the Center for Jewish History’s Academic Advisory Council. He is a member of The Academic Advisory Board of the Yale Fortunoff Archive and serves on the editorial boards of POLIN and East European Jewish Affairs.

Jason Stanley is the Jacob Urowsky Professor of Philosophy at Yale University. He is the author of 5 books, most recently How Fascism Works: The Politics of Us and Them. His next book, The Politics of Language (co-authored with David Beaver), is forthcoming with Princeton University Press in 2023. He writes on authoritarianism, racism, antisemitism, mass incarceration, free speech, the Holocaust, and related topics for the NY Times, the Guardian, Project Syndicate, the Washington Post, the Los Angeles Times, El Pais, Die Zeit, and many other outlets.