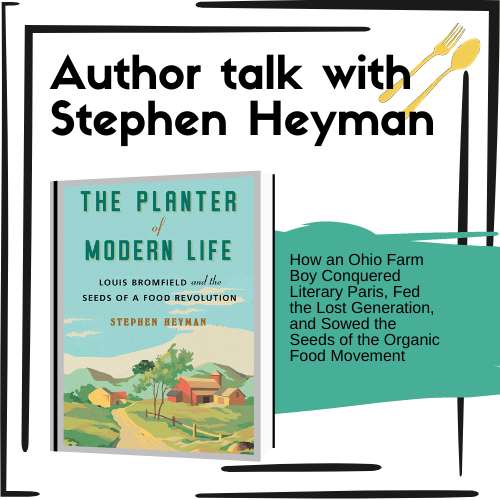 Stephen Heyman, author of The Planter of Modern Life will talk about America's most famous farmer inspired the organic food movement.

Louis Bromfield was a World War I ambulance driver, a Paris expat, and a Pulitzer Prize–winning novelist as famous in the 1920s as Hemingway or Fitzgerald. But he cashed in his literary success to finance a wild agrarian dream in his native Ohio. The ideas he planted at his utopian experimental farm, Malabar, would inspire America’s first generation of organic farmers and popularize the tenets of environmentalism years before Rachel Carson’s Silent Spring.

“A brilliant, engaging read about the life of a literary icon and, until now, unrecognized founder of the organic movement.” Dan Barber

Please register for this virtual program.

Sthttps://www.wakemantownfarm.org/ephen Heyman is a writer and editor based in Innsbruck, Austria. His first book, The Planter of Modern Life, a biography of the Lost Generation novelist and visionary farmer Louis Bromfield, won the IACP Award for literary/historical food writing and was long-listed for the Plutarch Prize for best biography. A former features editor at T: The New York Times Style Magazine, he has written for The Times, Condé Nast Traveler, Slate, Vogue and the Wall Street Journal, among others. In 2018, he was named a fellow at the Leon Levy Center for Biography and a National Endowment for the Humanities Public Scholar.