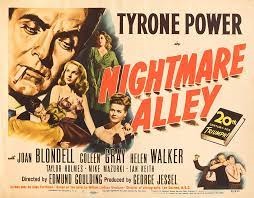 The Film Noir Film Series, inspired by the art exhibit "Double Indemnity", now on view in the Sheffer Gallery, continues on July 14th with the original, iconic film "Nightmare Alley", released in 1947.

Darkness lurks behind the bright lights of a traveling carnival in one of the most haunting and perverse film noirs of the 1940s,  Long a favorite of repertory programs, the film tells the story of an ambitious carnival worker who attempts to scam his way out of the carnival in this brutal noir. Starring Tyrone Power in a role some say was his finest.

If you missed the screening, please watch the film introduction by exhibit artists, Miggs Burroughs and Ann Chernow, HERE.