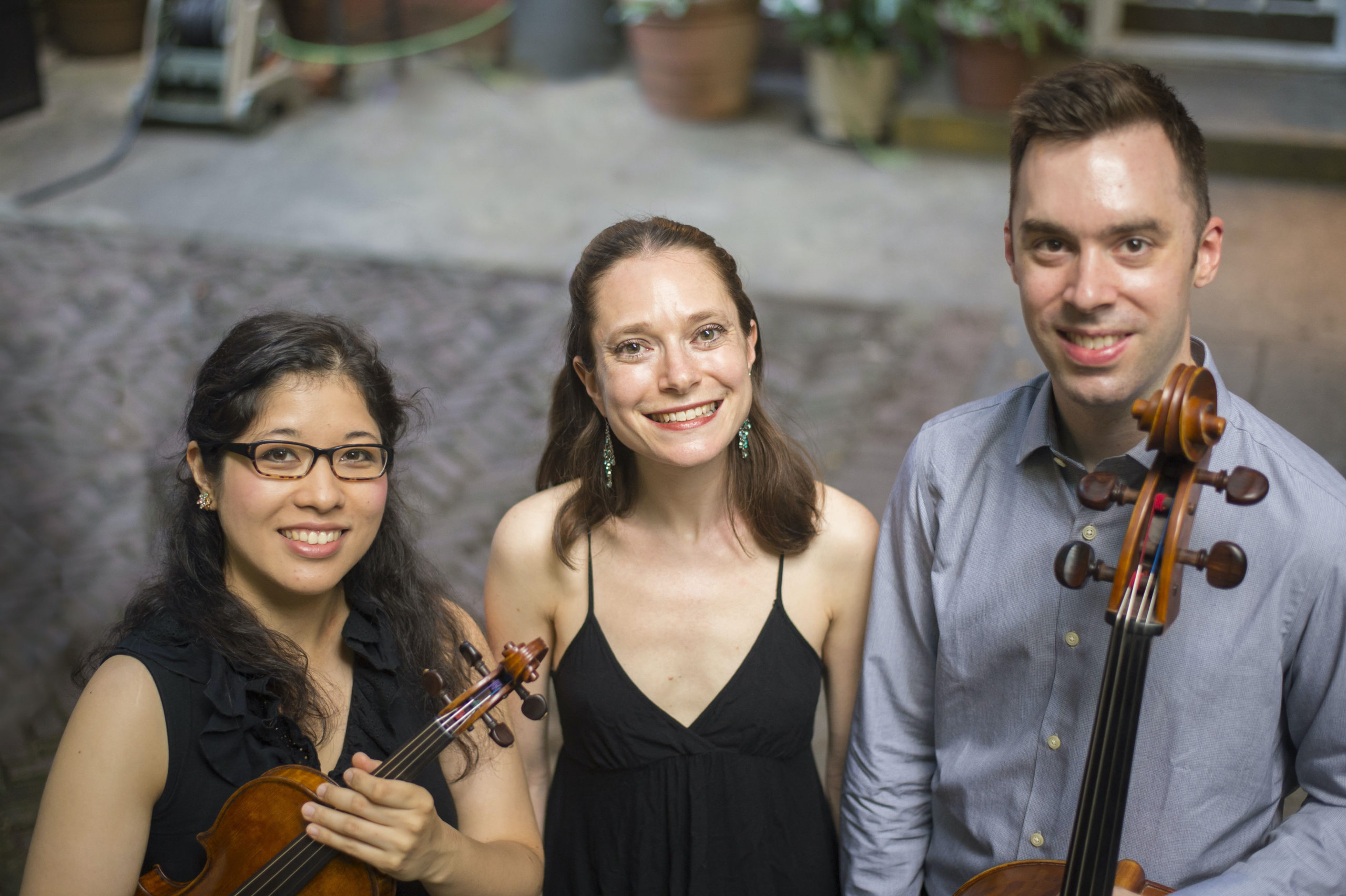 IF YOU MISSED THE PROGRAM, YOU CAN WATCH THE VIDEO RECORDING HERE.

The Fader-Gendron-Haas Trio presents an afternoon of romantic piano trios. All three members of the trio were born and raised in Connecticut, yet it wasn’t until they met in New York City (where they are currently based), and after they graduated from the Juilliard School, that they began making music together. Their ever-growing repertoire encompasses the hallmarks of the standard classical and romantic trio repertoire alongside newly commissioned works.

The concert will include Brahms Piano Trio no. 3 op. 101 and Mendelssohn Piano Trio no. 2 op. 66.  Both trios are in the key of C minor, and offer the full range of human emotion, from fury and passion, to tenderness, mischief and religious exaltation.

Emilie-Anne Gendron, violin
Lauded by the New York Times as a “brilliant soloist” and by Strad for her “marvelous and lyrical playing,” violinist Emilie-Anne Gendron enjoys a dynamic career based in New York City. She is a member of the Momenta Quartet (Artists-in-Residence at Binghamton University) and has been on the roster of the Marlboro Music Festival and Musicians from Marlboro since 2011. She also appears with A Far Cry, Chamber Music Society of Lincoln Center, Chamber Orchestra of Philadelphia, Orpheus, Talea Ensemble, Sejong, and IRIS Orchestra (as one of its concertmasters). She is a founding member of  Ensemble Échappé, a new-music sinfonietta, and the Gamut Bach Ensemble, in residence at the Philadelphia Chamber Music Society. Her international appearances have included festivals in Russia, Finland, Indonesia, South Korea, and Jordan; and major venues across the Americas, Europe, and Asia.
Ms. Gendron was trained at the Juilliard School where her teachers were Dorothy DeLay, Won-Bin Yim, Hyo Kang, David Chan, and
Axel Strauss. She holds a B.A. in Classics from Columbia University and a Master of Music degree and the coveted Artist Diploma from Juilliard.

Michael Haas, cello
Hailed as a “sterling musician” by the Washington Post, cellist Michael Haas engages audiences in New York City and around the world. As a member of the Momenta Quartet he enjoys performing new and adventurous works alongside those of the classical canon. He also appears with ensembles such as the Orchestra of St. Luke’s, American Symphony, Ensemble Échappé, Mark Morris Dance Group, Argento Chamber Ensemble, and Trinity Wall Street's NOVUS NY.
He has performed at the Library of Congress and the National Gallery, and participated in the 2017 Ostrava Days Festival for new and experimental music in the Czech Republic. Momenta has worked with over 120 living composers and premiered over 100 new works. This season marks their debut at the chamber music societies of Philadelphia and Louisville. An experienced orchestra musician as well, Mr. Haas was a member of the New Haven Symphony and performs regularly with the New Jersey Symphony, IRIS Orchestra, and Princeton Symphony. Originally from Windsor, CT, he holds degrees from the Curtis Institute of Music and Juilliard School. His primary teachers include David Soyer, Peter Wiley, Joel Krosnick, Darrett Adkins, and Marcy Rosen.

Melody Fader, piano
Melody Fader enjoys a busy career as a soloist, chamber musician, vocal and dance accompanist. She has performed in such iconic New York venues as Lincoln Center’s Alice Tully Hall and Carnegie Hall’s Weill Recital Hall and internationally in Belgium, Luxembourg, The Netherlands, Guatemala, Chile, Canada and Italy. Ms. Fader is the founder, artistic director, and pianist for her Melody and Company Chamber Series ensemble. Her first commercial album, Music of Frederic Chopin, was released in February 2012 and she is currently working on her second album. For two seasons Ms. Fader served as company pianist and soloist for Dance Theatre of Harlem and is the resident pianist with New Chamber Ballet for their annual performance cycle at New York’s City Center, and has also performed with Columbia Ballet Collaborative, Buglisi Dance Theater and the New York Theater Ballet and Stars of American Ballet. Ms. Fader was a prize winner at both the Coleman Chamber Ensemble Competition and the Aspen Concerto Competition, leading to solo as well as chamber music performances throughout the U.S. She earned her Bachelor of Music from the Eastman School of Music, and Master of Music in Collaborative Piano at the Juilliard School, where she studied with Margo Garrett.